Backdoor Attack activity in a computer system is designed for gaining backdoor entrance into a computer system and encrypted data in case an end-user is locked out of their device for any reason. The main motive of this program was to improve network communication between servers.

As it is discreet and effective, it is put to malicious use by malicious people; the hackers. Also known as the trapdoor, Backdoor Attack is a malware cyberattack that can trick a computer to skip the authentication process to enter into the system. Using a backdoor, hackers can access resources such as database and file servers using a remote computer.

The backdoor technique is used to install malware and modifying codes because it is hard to detect and convenient for hackers. It is basically an umbrella term form any technique that may help you grant entry into a computer system, network or software without their knowledge. 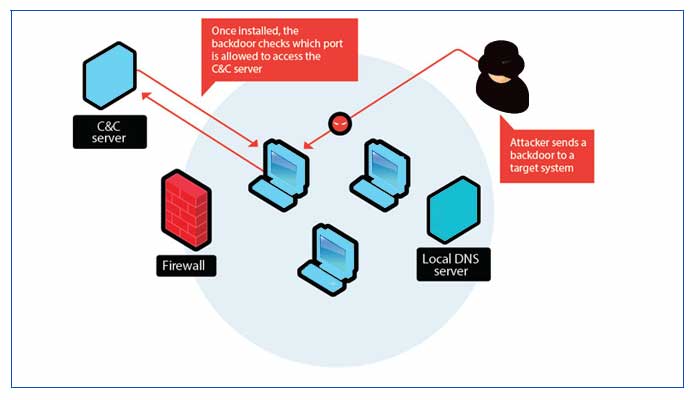 The level of backdoor threat is higher since the program is installed in most computers for troubleshooting by network administrations. Using the backdoor technique and infecting more and more computers with malware, worms, and viruses, a network of bots (given this name because the computer affected by this act on instructions) is created.

This network of bots is called Botnet which is mainly used to carry out Distributed Denial of Services (DDoS) Attack. The process in recent times has accelerated since new technology and tools have made it possible for hackers to gain backdoor access to many computers at the same time. One such tool is cross-platform malware which comes in the form of Java JAR File Executables.

It can spread with great speed because Java is programmed to run everywhere once it is written. Trend Micro’s report brought this new information about Cross-Platform Malware to light. The names of the report were ‘Backdoor Use in Targeted Attacks’.

Cross-Platform Malware uses a function called Port-Binding, which helps in finding the command-and-control server. The hackers gain access to other programs and make changes accordingly and Port-Binding keeps their presence and functions undetected by enabling the lateral movement.

Firewalls help in keeping the entry point of unauthorized access blocked which is the most effective defense against the backdoor attacks. Other methods that can be used in the defense are a strong network, an additional layer of security for your system and anti-malware software or program.