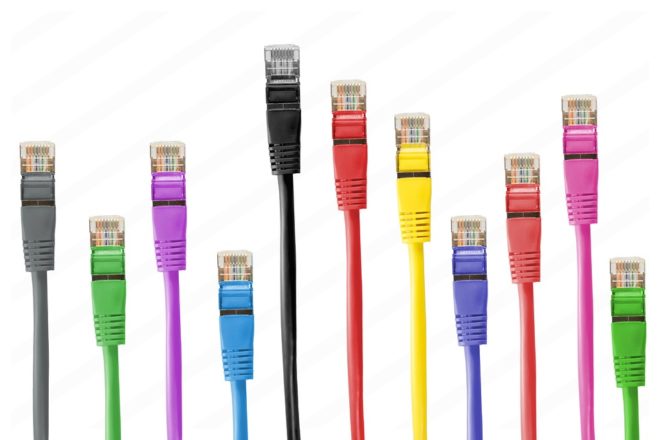 Different Types of Cable in Networking

Different Types of Cable in Networking

There are mainly three types of Cable these are the following:

Coaxial cable is a Types of Cable that has an inner conductor surrounded by a tubular insulating layer which is used as telephone trunk lines, broadband internet networking, carrying television signals and a connecting radio transmitter and receivers to their antennas.

Sheath:- It is used to prevent the coaxial cable from damage. The external part is made of the sheath.

Braided shield:- It protects the noises and other external interferences signals. And are made up of the same metal used to develop the core portion.

Insulation:- The core portion is protected by the insulator. The insulation is separated from braided shield because the core and braided are built by using the same metal, so if they touch each other they will create a short circuit. To avoid this insulation is used between them.

Conductor:-the electromagnetic signals are carried by the conductor.

The central core conductor of the coaxial cable is made up of solid or standard wire. This wire (we usually use copper) is also insulated by an insulating sheath. And this is again covered with an outer conductor. This may usually a metal foil or a braid or it can be a combination of the above two. These are again insulated with an insulating sheath. At last, the whole cable is enclosed by a plastic cover and it protects the cable.

10BASE5 is a Types of Cable which is also known as thick Ethernet or thicket. The name 10BASE5 is derived from several characteristics of the physical medium. In 10BASE5, 10 refers to its transmission speed which is 10Mbit/second and the BASE is short for baseband signaling which is opposite to broadband, and the 5 stands for the maximum segment length of 500 meters (1,600ft).

10BASE2 is a Types of Cable which is also known as a cheaper net, thin Ethernet, and thinnet. The name 10BASE2 is derived from the several characteristics of the physical medium. In the 10BASE2, 10 comes from the maximum transmission speed of 10 Mbit/second and the BASE is short for the baseband signaling, and 2 refers to the maximum segment length of 200 meters.

Twisted pair cable is the primarily developed computer network. It is also known as Ethernet cable. All the Local Area Networks are processed by using this cable network. The cable is made up of two different wires which are wrapped and get twisted together. This cable method reduces the interferences of the electromagnetic spectrum, this helps to run devices smoother with low noises from external devices.

Twisted pair cable is a Types of Cable in which two conductors of a single circuit are twisted together for the purpose of improving electromagnetic compatibility. It reduces the electromagnetic radiation from the pair and crosstalk between neighboring pairs and improves the rejection of external electromagnetic interference. It was invented by Alexander Graham Bell.

There are two types of Twisted pair cable.

Unshielded twisted pair (UTP) cables are the most common cable used in computer networking as an ethernet cable for the data transmission from one device to another device. It is used for short and medium-length connections because of its relatively lower cost compared to the optical fiber and coaxial cable.

Twisted pair cable is shielded in an attempt to prevent electromagnetic interference. Shielding provides an electrically conductive barrier to attenuate electromagnetic waves external to the shield and provides a conduction path by which induced currents can be circulated and returned to the source via ground reference connection. 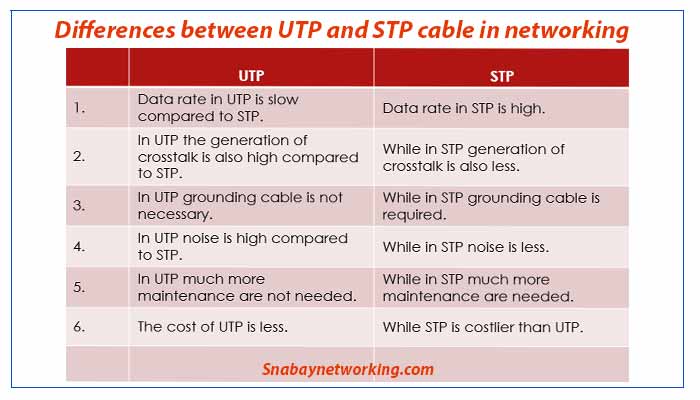 A Fiber Optic Cable is also known by the “Optical fiber Cable”. It is similar to an electrical cable, but containing one or more optical fibers that are used to carry light. The elements of the optical fiber are generally coated with plastic layers and contained in a protective tube suitable for the environment where the cable will be deployed.

The fiber optic cable contains components such as core, cladding, buffer, and jacket. The core is built by using the glass or the plastic which can carry the data over long distances. The core is covered by cladding. The cladding is covered by buffer and the buffer is covered by the jacket.

Core:- the data signals are carried by the core as light.

Cladding:- the lights get reflected in the core.

Buffer:- buffer is used to protect the light from leaking.

Jacket:- and the jacket is used to protect from the damages that are physically happened.

The jacket or buffer on the patch chords is often color-coded to identify the type of fiber used.

Download Different Types of Cable in Networking in PDF