A Star Topology is basically a network structure where multiple devices (nodes) are connected to one central unit individually, making the shape of a star if you look at its’ structure. In this network structure, signal and data are transmitted through the central unit or hub, as it usually is called, which acts as a server to all the other devices which can be seen as clients. To know more about the Star Topology Advantages and Disadvantages, keep reading this article till the end.

The central Hub needs to be a faster and self-contained computer than can control the other nodes and rout the traffic towards them since the whole strength of the network depends on the capability of the hub. An alternative name of this network is Star Network but this name can easily be confused with The Star Network which is a worldwide popular television broadcasting network.

To control the devices connected to it and to transmit data to them, the hub has a Content Addressable Memory (CAM) table. Inside this table are stored all the addresses of all the clients connected to the hub. The need for a CAM Table is necessary since the hub has no memory of its own. To find the address where a particular packet has to be sent, it uses Address Resolution Protocol (ARP). Cooperation between CAM and ARP is necessary. 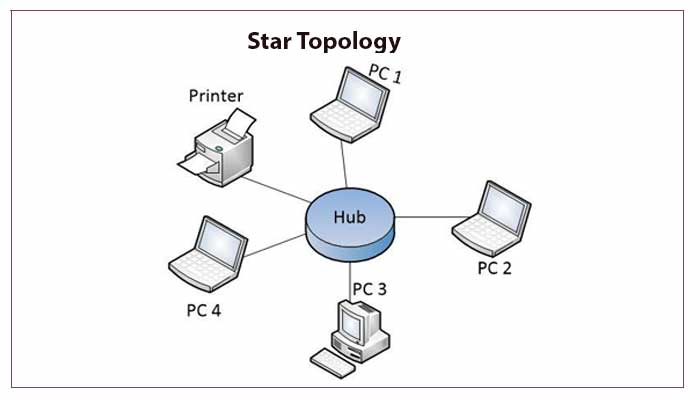 The activeness and passiveness of the star network depend on the data amplification or regeneration, the ability of the network to control data transit and whether or not the network is using the electrical power.

Unlike the Bus Network Topology, a Star Network is not dependent on a single cable but on an entire functioning computer, meaning that it has zero chances of a complete shutdown. If anything, only the connection of a node will be broken if a component goes down.

Connecting more devices becomes easy in this network because each device requires a separate connection and separate cables and their removal and addition don’t impact the network.

It is specially designed to take heavy loads and for large networks.

Since each of the devices needs to be connected to it separately with wires and cables, it is expensive and cost much more than the Bus Topology network to be maintained.

While it is good to have a communication channel that has a separate connection with each of the devices, the performance of the network is entirely dependent the hub and in case the hub breaks down, entire connection is lost with the devices and the procedure to set it up again is therefore long and demands more time than it is needed in the installation of the Bus Topology.