What is a Backbone Network?

A backbone is like the main trunk of a tree, out of which other branches emanate. This main trunk could be seen as a common connection to the other branches. Similarly, a backbone in a network helps in interconnecting different networks.

It is an infrastructure which provides a path so that the exchange of data can take place between the different networks connected to it.  Backbone networks are also called as Core networks. 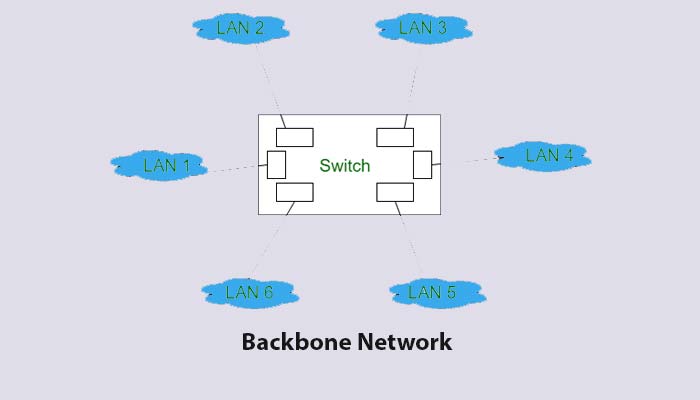 For instance, take several LAN (Local Area Networks). These LAN can be in different buildings, offices, or campuses. They may use a backbone network, to connect with each other.

Let’s take the above example for a larger geographical area. Suppose that there are various large networks in an area. The backbone network provides a set of pathways so that these large networks could connect for long-distance communication. These different networks might use different technologies.

They are connected to the backbone through points or nodes, different mediums such as optical fibre, copper cables, wireless technology.

The backbone serves as a common trunk as was in the case of a tree. We can see the backbone as a main super information highway which traditionally uses a bundle of wires to serve multiple networks. Now, the concept remains the same for a backbone, but the bundle of wires has been replaced by a wide variety of mediums. A backbone is supposed to have more capacity than the networks it serves.

Another example of a backbone network is the Internet backbone. These are the main data routes between large and strategically interconnected computer networks and routers on the internet. Government, commercial establishments, academic institutes and other high capacity network centres host these data routes.

It is typically a fibre optic trunk line. It is made up of multiple, abundant networks owned by numerous companies. Due to its inherent advantages and superiority over other mediums, optical fibre is the medium of choice for the internet backbone providers.

Authentication: A core network’s equipment has the capability of determining whether the user requesting service from any other network is authorised to do so within this network or not. If the outside network’s request is not authenticated, it cannot use the core network’s information-carrying capabilities.

Aggregation: It is the application of various methods to combine multiple network connections in parallel. This increases the throughput of the system beyond what a single connection could have sustained. It also helps in providing alternatives or redundancy in case any one of the links fail. The nodes of a core network provide the highest level of aggregation in a service provider network.

Charging: Since various networks are connected to a core network, its equipment is able to handle the collation and processing of data generated by these connected networks. This way, according to the data facilities used by the connecting networks, they could be easily charged in monetary terms.

Service Invocation: The various subscriber networks connected to a core network uses it for service invocation. In other words, core networks facilitate its subscribers so that they can use its services.

The subscribers might want to connect to other subscribers, and here the backbone network might enable an explicit action, i.e. connect or an implicit action i.e. waiting for a connection.

The service execution may or may not be core network functionality. It may be possible that third-party nodes might actually provide the services.

The above one or more logical functionalities may exist simultaneously in a given core network.

Backbone Networks usually have a mesh topology. Such topology provides for any-to-any connection among devices on the network

There are two basic types of backbone networks. Other types could be derived from them by arranging these basic types with some routers and connections. Other derived types are complicated distributed backbone, Collapsed Backbone (which uses a single powerful router as a central connection point for multiple sub-networks), Parallel Backbone (a variation of the Collapsed Backbone where devices have more than one connection between them).

There is a limit to the number of devices which can be connected in a repeated fashion in this type of arrangement. If the limit is exceeded, then data losses and unexpected errors might creep in the network. These networks might not be tolerant of faults and not very scalable. Hence, due to these limitations, they are not commonly used when compared to other types of backbone networks.

Backbone networks might become the prime target for malicious attacks. This is because of the central role they play in the internet and global communications. Hence, it becomes imperative for the backbone service providers to keep some details of their networks secret and mask certain things.

Large corporations tend to maintain their own system of backbone networks and might be using the networks of other corporations (in agreement), in different geographical areas.

This complicates the network dynamics. Also, the concept of net neutrality depends on the owners and maintainers of these networks. It is expected that they would faithfully observe the international and national laws and conduct their business fairly.