In this age of Information technology and with the advances happening in semiconductors, processors, and communication, Computers can communicate with each other. This happens through the arrangement of hardware and software in a planned way. Campus Area Network (CAN) is one of the ways to achieve this. Basically, CAN be defined as a connection of various (two or more) Local Area Networks (LANs) in a limited geographical area. While the LAN may be limited to a building or residence or school etc, CAN connect several buildings in a limited area.

A CAN is thus wider than LAN but smaller in geographical spread than Metropolitan Area Network (MAN). CAN be used in interconnecting networks in Military bases, dedicated laboratories, educational campuses i.e. of schools or universities or various departments in a limited geography. This limited geography may extend from one to five Kilometres in range. Almost all the equipment and physical hardware used in CANs are owned by the campus owner. This campus owner may be a university, government department, corporate entity or an organization.

In a CAN, computers may be wirelessly or wire connected. Along with the sharing of computer resources, data, research work, information, etc, CAN make a private network within an organization. Also, since sharing of resources occurs on a CAN, there may not be a need to install software on all the computers and thus users can access and use software through the network. Such services are provided by servers placed in the network. 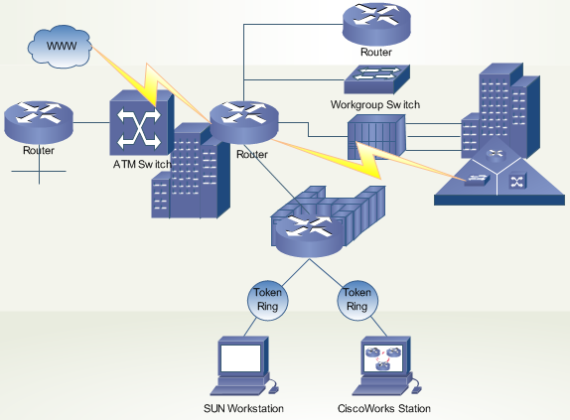 Now one may wonder about the workings of a CAN. Basically, CANs work on similar principles as that of a LAN, but on a larger scale and with more connections and resources required. Computers connected to the network can broadly be differentiated into two categories, i.e. Servers and Workstations.

Humans don’t generally use Servers directly, but these servers run continuously to provide lots of services such as software hosting, file storage and sharing, data storage and access, security, safety, and other such features. Humans interact with the network and utilize their services through the Workstations. Workstations may be a desktop, laptop, android devices, iPhone/iPad, etc. Servers are more powerful than Workstations and have higher speeds and very large storage than the Workstations.

Thus, a LAN in a CAN may comprise various Servers and Workstations connected through cables or through wireless mediums, but typically wired connections may be found in a LAN. CAN may be arranged by connecting different LANs through routers, switches, hubs, copper wires or optical fiber. But in most cases nowadays CANs are connected through more economical wireless mediums as compared to wires and cables. So, multiple LANs interconnected together to form a CAN may connect to each other via wireless mediums. But this preference depends on the organization’s economy and preferences. Also, since a CAN is limited, so the data transfer rates in a CAN are faster as compared to a Wide Area Network (WAN) or MAN.

So now one may wonder about the ways in which the devices in a CAN may be connected i.e. about its topology. The topology of a CAN may be of various types depending on the requirements and economy, availability of resources.

A Campus Area Network (CAN) may be connected in mesh, star, ring or bus topology. Different LANs within the CAN may have their own topology for connection and communication amongst its nodes. So, varying LAN topologies can still be connected to each other even if they use the same or different physical means or protocols. Also, Bridges, Ethernet cards, hubs, switches, and routers play their respective roles in such connections.