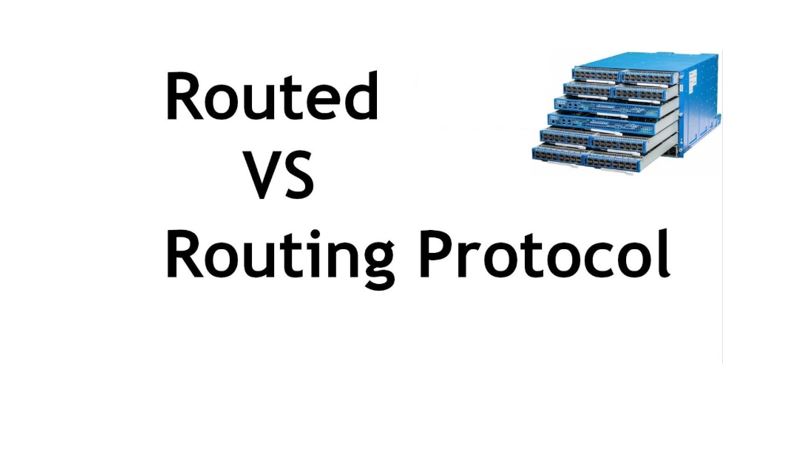 To know the Difference Between Routing Protocol and Routed Protocol keep reading this article till the end. Routing protocol and routed protocol are commonly used two types of protocols. A routing protocol can be used to specify how the routers communicate between them.

By communicating between them, they can pass information among them and this process enables them to choose the routers in between any two nodes in a computer network. We can only use the routing protocol between routers. The main use of routing protocol is that it helps others to create and maintain the routing tables.

The routing protocol works or runs only on the followings:

file transfers, web traffic, emails, etc.). Majorly used routed protocol is IP. One Routing protocol can be run in multiple routers and can transmit the updations as well as the best routes to a destination.

The routed protocol, on the other hand, is a protocol that is used to route data from one network to another. All the application traffic can be transmitted by using this protocol through the network. All the needed addressing information is provided from its network layer or internet layer. Routed protocols include the following(3 major types),

We can also define a routed protocol as, It is a network Protocol that can bee used to transmit the user data, these data are from one network to another. In this type, the protocol holds user traffic(including the best example that uses the IP is the internet. There are many versions, where the internet uses the IPv4 or IPv6 as the routed protocol.

In this type of routing, we require an addressing scheme. If we want to fin that a host belongs to which network, we can use this addressing scheme for that purpose. All the services provided by the routed protocol can be used by all the hosts on an internetwork, such as routers, servers, workstations.

The most commonly used Routed protocols are IP and IPX. Routing is used by routed protocols. In routing, there are special devices used for transferring the packets, which are called routers, outside the network. The routers are placed in the eds of multiple networks. This is to provide the connectivity between the networks.

What is Etherchannel in Cisco Switches and Routers - Snabay Networking

[…] networking, there are multiple types of routing algorithms they all are grouped or classified based on modification that happened to the routing […]