As suggested by the name itself, a hybrid topology network is a combination of two different types of topologies. What we need to keep in mind is that two typologies of the same kind cannot be combined together to form a hybrid. To know more about Hybrid Topology Advantages and Disadvantages, keep reading this article till the end.

Most of the time, the setup of hybrid is unintentional since the layout of it is never planned but when two topologies are near each other, they can be combined to provide better services. Combined topologies work better together as you’ll soon find out ahead in the article.

The most known example of this Topology is the tree topology network which is a combination of a bus and a star. Hybrid Topology is usually prepared especially on demands, mostly by companies and organizations. 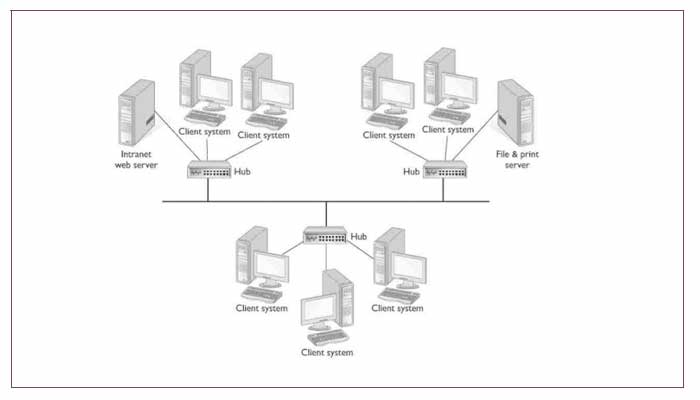 A hybrid topology is known mostly for its fault tolerance capability. Errors can be detected and their source can be taken out to be corrected with no risk of disrupting the network system. This solution is so effective that the user doesn’t even realize that there was an error. This extraordinary feature makes it popular with large business enterprises and online gaming companies who cannot compromise on the quality of their networks. To say this in simple words, it has amazing troubleshooting which is a term even a person not very familiar with networking knows and understands well.

What makes this topology a huge success is its’ ability to combine the strengths of the two combining topology and weed out the weaknesses.

Scalability is one of the reasons it is so popular in the networking field.

Expanding the network is relatively easy in this topology network. It is suitable for networking needs where the scope of growth looks brighter. All that is needed to be done is to pick up the main cable channel and add more devices and branches to it.

The issue faced mostly in this type of network is the complex structure of it. Designers often have a hard time trying to come up with a plan to lay down the network.

The hubs used in the hybrid type needs to be intelligent since they have huge responsibilities to handle. These cost a large amount of money and given the quantities of the wires and cables used in the structure, this topology probably is the most expensive out of all. The cost of maintenance increases as more and more devices and network branches are added to the main network.