Having a layout with physical entities and forming a structure in a network for connected devices is a topology.

This marks out only the shape of the network and this can also refer to the locations of the computer and the cable that works between them. And describes its working.

In various topologies in a network tree topology is one of them.

The different variety of topologies are,

The first four types of topologies are widely used and known by many people.

Now we are going to discuss tree topology.

When we are going to discuss tree topology, there is a question that will raise, what is a tree?

The tree is maybe a physical entity in an environment but, when coming to computer networking, the tree is considered and represented as a structure or a diagram in a hierarchy form.

These types of structures are also intended to be in a graphical form. 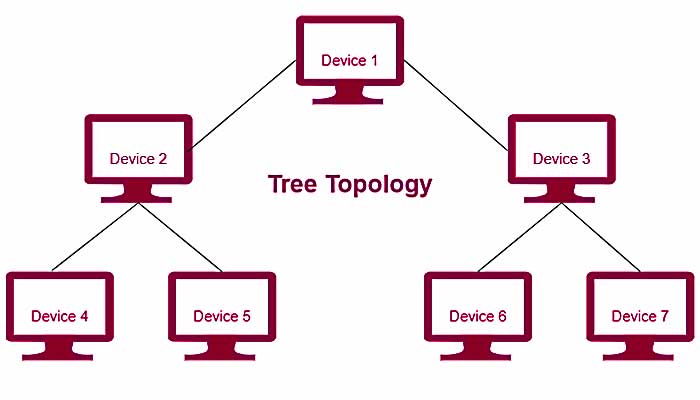 There is an availability of a central hub in this kind of topology to which only a few nodes are connected in a directed form.

If one has seen the name called active hub then that active hub is simply called a central hub. This will look at all the approaching bits and regenerate them so that, they can be able to propagate over a longer distance.

the secondary level of the hubs in a tree topology can be either an active hub or a passive hub.

If there is a failure in any approaching bits or when transmission then, the node gets separated from the network.

This is a hierarchical topology where many elements are arranged like branches of the tree. This topology divides the network into multiple levels or layers of the network.

The tree will be having different branches associated with it similarly, the tree topology is having hubs within it. These hubs are connected serially. When we observe this serial mannered connection, we get an idea of bus topology, and when we observe the nodes which are connected to hubs we sense the star topology.

As in bus topology, all the nodes are connected to a longer cable.

By making use of these concepts, the tree topology was structured.

The above figure describes the tree topology which has three types of layers in that as,

The lowermost layer is the access layer where the computers are attached.

The middle layer is a distributed layer that works as an intermediate between the upper layer and the lower layer.

And the upper layer is the core layer. Which is the central point of the network that is the root of the tree from which all the nodes are acquired.

The several star topologies are connected to a single bus. The nodes in the star topology are linked to a central hub that will be controlling the traffic to the network.

Not every device gets controlled directly in a network. The majority of devices connect to the secondary hub and these secondary devices get connected with the central hub.

Where the numerous star networks make a link by using the bus topology.

The cable which is the main will be seen as the main route in a tree and branches are like star networks.

The active hub will be having a repeater, which is a hardware device. This repeater will regenerate the receiving beam before sending them out for transfer.

The secondary hub may be active or passive. The passive hub provides a simple physical connection between the attaches.

It can be used to structure many kinds of data including the computer program.

From the above diagram, we can illustrate that there is n number of entities or multiple devices that are connected through a hub. And the connection and communication made possible with the help of the hub.

These entities are present in the lowermost layer which acts as an access layer because one entity will be accessing the information that is shared by another entity.

For these entities, the hub is a central controller for transferring but not a central node or the main node.

Because the main node which is a central hub is present at the core level.

In the diagram, there are two computers which are connected to one hub. Then this structure is called one hierarchy in the network. So if one wants to communicate with the device that is present in its hierarchy only then, the transfer is done first to the hub which is at the distribution layer. Where the hub will scan the data and transfers it to the destined authorized user.

Similarly, there are another two types of hierarchy along with this one in the network.

So if one wants to make the transfer between the other two types of hierarchies. Then, it follows a route for transfer.

At first, the entity will be sending the data to its distributed layered hub then the hub will transfer it to the hub which is present in the core layer.

Here, the core layer will be scanning the destination address to which entity it has to send and at what location of the hierarchy the entity was present.

Then after finding the destined location it makes a transfer to its lower layer which is the distribution layer where the hubs are active.

These active hubs will make the transmission of data to the destination. In this way, the topology works.

What if the network breaks?

If there is a possibility of a break in the network, the tree topology which is having the basic and common structure greatly relies upon the bus cable which is the main core component.

The whole network is disturbed or takes down when this breaks.

that means, at any of the points if the cable gets a break the termination of the computers on each side will be lost.

Because of this loss of termination in the bus, the signals, and the data which are present will becomes corrupt. And also the signals will get reflected.

Additionally, the network cards will become bad and produce noisy signals on the bus because of this the entire network will be disturbed, and the functionality of the network becomes improper.

Why we use this topology?

For the expansion of the already existed network with the presence of physical entities then we are going to use this tree topology.

When to use this topology?

If the networking topologies which are basic for transmission structures are not suitable for transmission then the combination of this will be utilized which is nothing but a tree topology.

If the reason is about scalability for not working in both star or bus individually then the tree topology is the more suitable alternative for it.

In the star and bus topologies, the extension is not possible for making the transfer. So they use the medium to form connections with other nodes. Even if there is connectivity for transfer in tree topology still, the connection can be expanded for the node to node connectivity by making use of the secondary nodes.

So by achieving the extension the scalability is also attained.

This is most suitable for multiple departments of a university or corporation in networking.

Where each unit is separated and get connected to the main node. In this, each unit that was mentioned was a star segment and the main node is a root node.

Even the advantages that are achieved by the centralization concept or techniques are also inherited in the form of star segments that are in tree topologies.

The tree topology which is a tree-like structure allows an individual to have many servers on the network.

And in a network, there is a possibility of many branches and also supports the branch to branch connections. The branches can be linked up in many ways in the network.

Where can we find this type of topologies?

This topology can be used and observed in many cases like, for colleges and universities or for schools. So that each branches of these corperations can be identified. By braching up, it helps one to identify their own appropriate systems in their network. With usage of this procedure it tries to help for connecting the big networks in some way or other.

The hardware the was used and needed for the configuration of this type of topology it is suggestable to have the main trunk. With the help of main trunk the smaller networks like branches are extended. Basing upon these, we do need the fiber optic cable with atleast one multi port switch or a router.

Depends upon the security requirements, each branch will be having a edge bound connectivity device so that requirement can be attained by a switch or by router.

Difference between Tree and Bus topology

An overview about tree topology, the structure is basically designed in the form of tree itself where we utilize the components like wire or cable and the entities are connected with branches by making possible flexibility to devices by having multiple connections to the node in the form of inheritance.

Tree Topology Network is a combination of the bus and the Star Network. More than one-star networks can be connected together using a bus network. Different branches, as it is what the star networks look like in a Tree Topology Network, are connected on a bus network at different points on a specific distance and this bus network channel resembles the root of a tree. Because it’s a combination of star and bus networks, a tree network is often called Star Bus Typology. To know more about Tree Topology and its Advantages and Disadvantages, keep reading this article till the end.

It is used most of the time when scalability or hierarchal communication is needed. To know more about Tree Topology and Its Advantages and Disadvantages keep reading this article till the end.

Talking about example, Tree topology is used in the building where the hub is installed vertically and branches are spread each on a floor.

What is Router in Networking?

What is Internet, Intranet and Extranet

Campus Area Network (CAN) With Example