What is the Transport layer? The fourth layer of the OSI (Open Systems Interconnection) Model is the Transport Layer. Primarily, it is responsible for the guaranteed delivery of packets transmitted by the Network Layer. Although, it doesn’t always have to do so. To know more about the transport layer in the OSI Model keep reading this article till the end.

It is dependent upon the protocols being used, that the delivery of the packets may or may not be guaranteed. But, whenever the transport layer is responsible for the guaranteed delivery of packets, it is achieved through various ways of error control.

This includes the verification of sequence numbers for packets and other protocol-dependent mechanisms.

The higher layers in the OSI Model need not concern themselves about the things happening at the lower layer processes. Hence, this layer is also designed to hide the characteristics of the computer network structure from the upper-layer process.

The Transport Layer organizes higher-level messages into segments and then reliably delivers those segments to Session Layer or higher-layer processes.

The transport layer tries to or often compensate for lack of reliable, or connection-oriented, connection services in the lower layers. The protocols at this layer can usually confirm or deny data delivery.

If the data is not delivered at the receiving device in a correct fashion, then the Transport Layer can initiate transmission or inform the upper layers about it. Then, the upper layers can take necessary corrective actions or provide the end-user with certain options.

The services provided by the transport layer are as follows:

Many people correlate the Connection-Oriented Protocols with reliable or error recovering protocols because of the two features are often implemented by a single protocol.

The definitions of the two services or protocols are given below:

There is an exchange of messages before the beginning of data transfer or has a required pre-established correlation between the two communicating endpoints.

In this protocol, there is no need for exchange of messages and it doesn’t need a pre-established correlation between the two communicating endpoints.

The definitions are sufficiently general so that all cases can be covered. TCP (Transmission Control Protocol) is connection-oriented because a set of three messages must be completed before data is exchanged.

Similarly, SPX (Sequenced Packaged Exchange), a legacy protocol used earlier to the TCP, is connection-oriented. While using PVCs (Permanent Virtual Circuit) in Frame Relay, it is not required that any messages be sent ahead of time, but it required predefinition in frame relay switches, establishing a connection between the two attached devices.

Functions of the Transport layer

Given below are a few specific functions of the Transport layer: 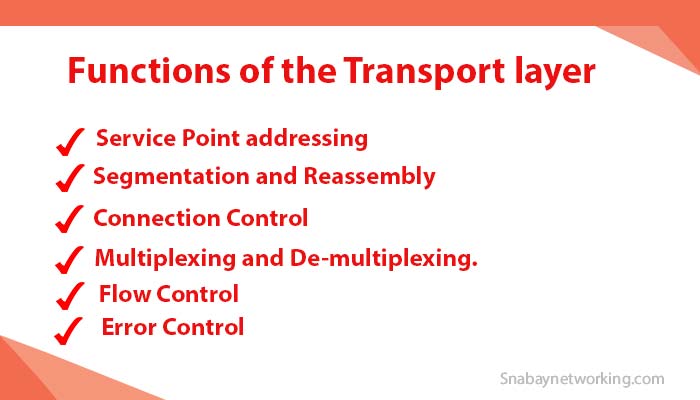 A computer can run a lot of programs at the same time. Because of this, in networking, source to destination delivery means delivery from a specific job in one network/system to a specific job on another computer which might be located in some other system/network.

Because of this complexity, a specific type of address is added by the transport layer. This address is called as Service Point Address or Port Address. With the help of this address, a complete message reaches the correct computer.

On the sender side, a message is broken in various transmissible fragments under the process of Segmentation. Each segment has its own sequence number. This number is helpful for this layer in reassembling the messages.

When the message arrives at the destination side, it is reassembled using the sequence numbers in the correct way. Also, if any packets were lost in transmission, they are identified and replaced by this layer.

It contains a Connectionless and Connection-Oriented Protocol. (They have already been discussed)

In the network, multiple packets from diverse applications are transmitted across a network. These packets need very dedicated control mechanisms. This layer accepts packets from different processes, differentiates them using their port number, and passes them to the network layer after adding proper headers.

In De-multiplexing; this happens at the receiver’s side to obtain the data coming from various processes. It receives the segments of data from the network layer and delivers it to the appropriate process running on the receiver’s machine.

Flow control basically means a sender is not overwhelming a receiver by sending packets faster than the receiver can consume. Transport layer provides a flow control mechanism between adjacent layers of the TCP/IP model.

It prevents loss of data in the case of a fast sender and slow receiver with the help of some flow control techniques. A protocol such as the Sliding Window protocol, for instance, is used to achieve flow control. In this protocol, a receiver sends a window back to the sender informing it of the size of data it can receive.

The flow control is achieved through Buffering, Congestion avoidance, and Windowing.

Buffering simply means that the computers reserve enough buffer space that bursts of incoming data can be held until processed. No attempt is made to actually slow down the transmission rate of the sender of the data.

Congestion avoidance is the second method of flow control. The computer receiving the data notices that its buffers are filling. This causes either a separate PDU (Protocol Data Unit) or field in the header, to be sent toward the sender, signaling the sender to stop transmitting.

[A PDU may be taken as a single unit of information that is transmitted among peer entities of a computer network.]

Just like the Data Link layer, error control is also performed end to end in this layer. This layer ensures the arrival of the entire message at the receiving transport layer without any error which may include damage, loss, or duplication of the message. A retransmission of the packet takes place in the case of error correction.

Transport Layer is the fourth layer in the Open Systems Interconnection (OSI) Model, which is actually called the host-to-host Transport Layer but the name has been shortened to spare the inconveniences of pronouncing and writing such a long name.

It is referred to as the Transport Layer and you can find it just above the internet Layer and below Network Layer, the two-layer it shares its’ functioning with.

It is defined as a conceptual division of the methods that are in the layered architecture of protocols. The major role of this layer is to provide direct logical communication between applications running on different hosts and end-to-end communication on a network.

For connection-oriented transmissions of data, Transport Layer uses Transmission Control Protocol (TCP) which not only sends the data but also verifies that it has been delivered without compromise in accuracy and sequence.

For doing this, TCP uses a mechanism called Positive Acknowledgement with Re-transmission (PAR), which makes it capable of sending data again and again until it gets the confirmation of the delivery.

Since it has the responsibility of making sure the packets are delivered in a strict sequence, it can also fix any error that may occur that threatens the disorganization of this sequence.

The only fault in this method is that it increases the network load and can cause congestion and slow down because it requires confirmation of each and every delivery.

By using the User Datagram Protocol (UDP), Transport Layer can provide a simple message carrier service that may allow the transmission of the messages only. Some lesser-known and additional protocols used in the transport layer are the Datagram Congestion Control Protocol (DCCP) and Stream Control Transmission Protocol (SCTP).

The transport layer uses the checksums mechanism to detect any error in the data transmission. The role of the checksums is to make sure that the data received by the receiver is the same as the data sent by the sender. This mechanism is not only used in this particular layer but in all the layers through the model.

The only medium of interaction between the two devices is the layers and these devices are therefore not capable of detecting the capacity of each other in terms of data transmission.

In case the sender sends data faster than the receiver can receive, it can cause a breakdown in the process. To control the flow of data and prevent breakdown by overwhelming is also the role that is played by the Transport Layer.