In the OSI (Open System Interconnection) model, the Network layer is the third layer. This layer is mostly associated with the movement of data by, which is achieved by the means of addressing and routing.

This layer directs the flow of data from a source to a destination, and this may be irrespective of the thing that the communicating machines might not be connected by the same physical medium. This is achieved through finding an appropriate path from one communicating machine to the other. For the purpose of transmitting data, if necessary, this layer can break the data into smaller chunks. Sometimes, the breaking of data becomes necessary. At the end, this layer is responsible for reassembling those smaller broken pieces of data into the original data after the data has reached its destination.

In other words, the network layers help in establishing communication with devices. These devices, connected over the internet, might be located on logically separate networks. The network layer uses various routing algorithms to guide data packets from a source to a destination network. A key element of this layer is that each network in the whole web of networks is assigned a network address; and such addresses are used to route packets (which is covered under the topics of Addressing and Switching, explained later on).

When the data is passed down to the next layer, then this implies that the lower layer needs to perform some services for the higher layer. In order for these services to be performed, the lower layer adds some information to the already existing header or trailer. For instance, the transport layer (lower layer) provides with its data and header to the network layer (higher layer). Then the Network layer adds header with the correct destination network layer address in order to facilitate the delivery of the packet to the other recipient machine.

Also, this layer translates the logical address into physical address. This layer decides the route from source to destination. It also manages the traffic problems such as switching, routing and controlling the congestion of data packets.

Besides this, the main functions which are performed by the network layer are:

In Circuit switching, the path for communication remains fixed during the duration of connection; this enables a well defined bandwidth and dedicated paths.

In Message Switching, each message is treated as an independent entity carrying its own address info and destination details. The info is used at each switch to transfer the message to the next switch in the route. The benefits in this mode: relatively low cost devices, data channel sharing, efficient use of bandwidth.

In Packet Switching, messages are divided into smaller packets. Each packet contains source and destination address information. Packets could be routed through the network independently, without the need to be stored temporarily anywhere. This switching mode routes the data through the network more rapidly and efficiently.

Services which are provided by the Network Layer:

In networking, Jitter is the variation in the latency of packet flow between sender and receiver systems. This happens when some packets take longer time to travel from one system to the other. Jitter in a network might be due to network congestion, time drift and change in routes.

This is an overview of the Network Layer protocol PDF, if you want to read full article in pdf, we have provided download link below

In order to achieve its goal, the network layer must take into consideration the topology of the communication subnet (i.e. the set of all routers) and choose appropriate paths through it. At the same time, it should choose routes in such a ways so as to avoid overloading some of the communication lines and routers while leaving others idle. At last, when the source and destination are in different networks, it is incumbent on the network layer to deal with the differences in the networks and the problems arising out such differences.

The third layer of the Open Systems Interconnection (OSI) is called the network layer. While the Data Link Layer functions mostly inside Wide Area Network (WAN) and Local Area Network (LAN), Network Layer handles the responsibility of the transmission of data in different networks.

It has no use in the place where two computers are connected on the same path or link. It has the ability to route signals through different channels and because of that, it is considered a network controller. Through this layer, data is sent in the form of packets.

The primary responsibilities handled by the Layer are the Logical connection of a setup, routing, delivery error reporting, and data forwarding. 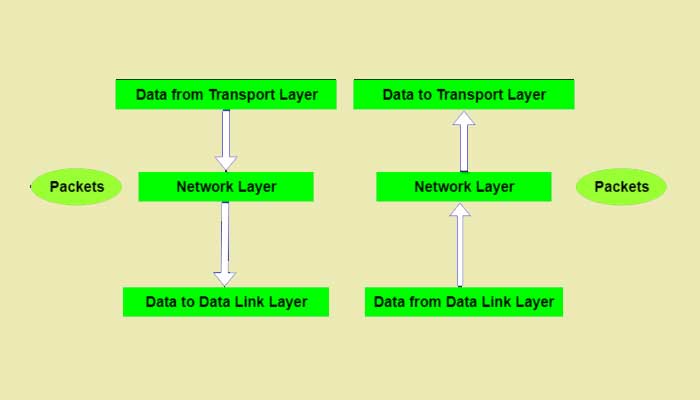 Because of its functionality and responsibilities, the Network Layer is often seen as the backbone of the entire OSI Model. Hardware devices such as routers, bridges, firewalls, and switches are a part of it with which it creates a logical image of the communication route that can be implemented with a physical medium.

The protocols needed for the functionality of the Network Layer are present in every router and host. Making it one of the most useful of all the layers.

Most known among these protocols are IP (internet protocol), Internetwork Packet Exchange (IPX) and Sequenced Packet Exchange (SPX) or as they are collectively known; IPX/SPX. IPX protocol is also used by the Transport Layer, which alongside the Data Link Layer works with Network Layer as they are placed above and below this layer respectively.

The functions of the Network layer are as follow: