Computer Network Topology or simply Network Topologies is a virtual structure consisting of links and nodes which sometimes is called the network architecture. The job of the Network Topology is to define how two devices are connected to each other and how the process of data transmission is carried out. to know all the Types of Network topology, keep reading this article till the end. 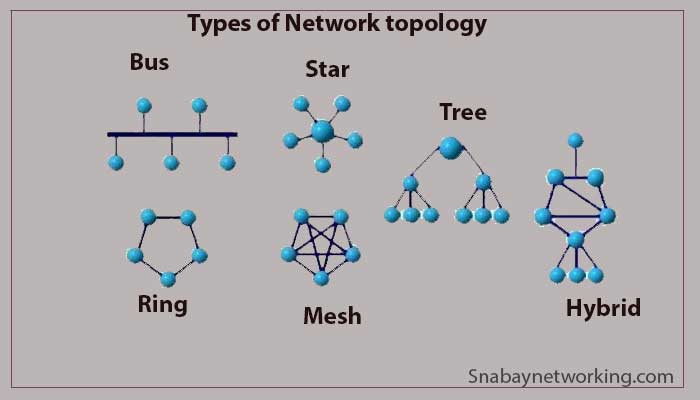 Point to Point Topology is the simple process of connecting two devices through a single cable.

In the Bus Topology, more than two devices are connected on a single communication line which will no doubt result in overwhelming of data

Star Topology simplifies the complications witnessed in the bus topology by connecting all the devices on the network to a central device. To simplify the process further, star Topology requires only one cable for the entire network connection which makes it pocket-friendly and simple in the configuration.

Ring Topology looks exactly like a ring with each device connected to two devices at the same time, one on the left and one on the right. Let’s say there are four devices connected in a Ring Topology with the circle starting with device A.Now the device A is connected to the devices B and D but not to device C. In case device A wants to send data to device C, either device B or D will become an intermediate device so the transmission of data can be done.

Mesh Topology brings a lot of complications as the devices in this topology is connected to multiple devices. There are two subcategories of the mesh Topology which are; full mesh topology and partially mesh topology.

The most commonly used form of topology is the Tree Topology which divides the layers of the network. It looks like an extended star topology with inherited traits from the bus topology.

A Hybrid Topology is simply the structure consisting of more than one topology.