In the earlier times for telecommunication or for enabling an internet connection copper wires were used. Optical Fibre, later on, replaced the copper cables due to advantages such as greater bandwidth, faster speeds, reliability, the capability to carry information over long distances etc. here maybe two ways of splitting up the data and further transmitting it; they are an active optical network and passive optical network (PON). The network setups in a LAN (Local Area Network) where PON is used may be called as a POLAN (Passive Optical Local Area Network).

Optical Fibre uses light signals for the transmission of data. In order for the data to be retrieved at the proper destination, a way is needed to separate it.

In an active optical network, electrically powered switching elements are used. These elements manage the distribution of the signal to specific customers. These switching elements work in various ways to place the incoming and outgoing signals to a proper place.

A passive optical network, on the other hand, involves no electrically powered switching elements. They instead use optical splitters to separate and collect optical signals. Since these elements don’t require power, hence the name “passive”. Such networks require power only at the source and receiving the end of the signal.

A PON system consists of optical line termination (OLT) at the communication provider’s end and a number of optical network units (ONU) at the user’s end. The term “passive” simply means that there are no power requirements while the network is up and running. A POLAN implements point-to-multipoint architecture i.e. here unpowered fibre optic splitters enable a single optical fibre to serve multiple endpoints.

The following figure further clarifies this arrangement. In this figure, the signals sent from the Central office to the ONUs, i.e. the downstream signals are broadcasted to all ends using the optical fibre. The signal from the multiple ONUs to the OLT i.e. the upstream signals are combined using multiple access protocols such as the TDMA, which has been explained below.

TDMA is a method which allows multiple stations to access a channel or a medium without causing each station’s signal interference into other signals. This is achieved by dividing signals into different time slots. Each station transmits in rapid succession and each one is allotted its own time slot. In this way, multiple stations may share the same channel but use only a part of its capacity.

A passive optical network can be of three types: 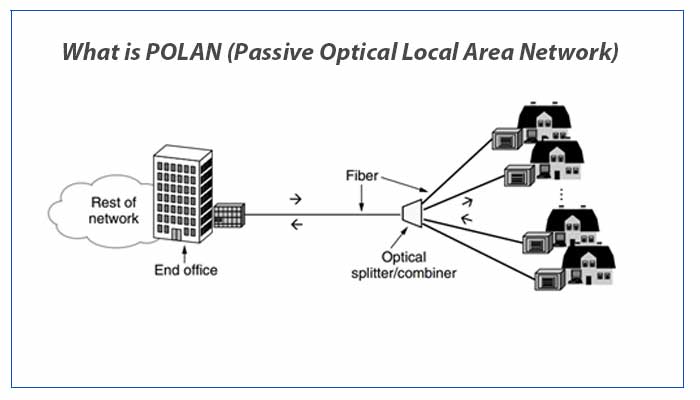 Advantages of a POLAN

Disadvantages of a POLAN