before going to tell you Difference between Cat5 and Cat6 cable let me tell you about the ethernet, it is a communication standard that was developed in the late ’90s for local environments like Homes and Buildings. This local environment connects multiple devices to retrieve and share information from multiple users at different locations.

The Local Environment is nothing but the local area network. So how the Data is getting transmitted? The Ethernet uses the wired communication cables to transfer the information within the local environment.

In the Later ’80s, Ethernet communication is standardized as IEEE 802.3. IEEE stands for the Institute of Electrical and Electronic Engineering. Let us discuss in detail the IEEE 802.3 standard in moreover topics. We can see the Ethernet cable connections that are connected through a user computer and modem.

In the Ethernet cable connection, One end of the user’s computers is connected to the router or modem that allows internet access.

We use many different types of Ethernet cables. Let us know the introduction of each cable in detail. 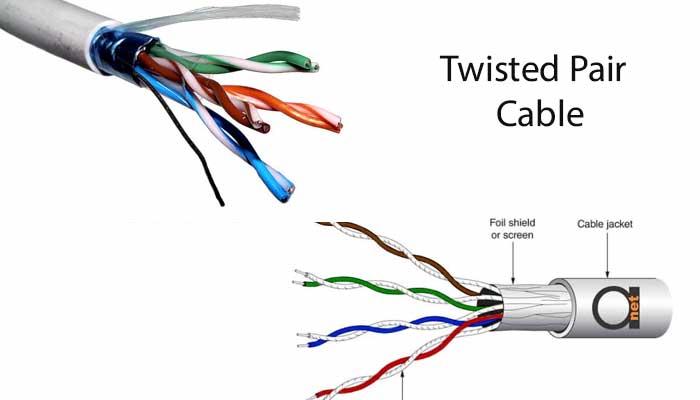 There are two different types in the twisted pair cable :

The most common tables we use in the LAN connections are two types with two different standards of 568A and 568B :

We arrange based on the order of the colors in the LAN connections.

And there are different categories in the Twisted pair Network :

CAT 5, CAT3, CAT 7, CAT 6 are the different categories in the twisted pair cables. They can have a maximum speed without using the cross talk interference. The Speed of each Category differs from one CAT to others.

The CAT 3 has the smallest speed with 10 Mbps and CAT 7 is with the highest speed.

The CAT 5 cables are the LAN cables that connect the Local Environments. Usually, we use the Cables to transfer the information from one user to the other user inside the Local environment. The CAT 5 cables are Lan cables with eight colors and 52 pairs. Each pair consists of a Plain wired and the Strip wired with the same color. Green, Blue, Orange, Brown are the colors we used in the LAN cables.

We call these pairs as the unshielded twisted pairs since it doesn’t get wrapped inside the metallic field. Here, we all get a doubt why these cables are get twisted? Instead, we can simply wrap the Cables in the metallic wire without getting Twisted. But, When the Cables get wrapped in a straight manner, the magnetic field gets generated that interferes with the other data transferring Cable.

Let us know the functioning of the color cables in detail. The Orange cables are used to send the data from sender to receiver. The Green Cable is applied to receive the data from sender to receiver. These colors also check the polarity of the wires. The Orange color wires have a positive polarity and, the green Cables have a negative polarity. The Blue and Brown colors have been used to enhance the bandwidth.

Now, What is Bandwidth? How it is different from the Speed? Now, let’s clarify these doubts.

Now, we have known the clear difference between Bandwidth and Speed.

What is Base T 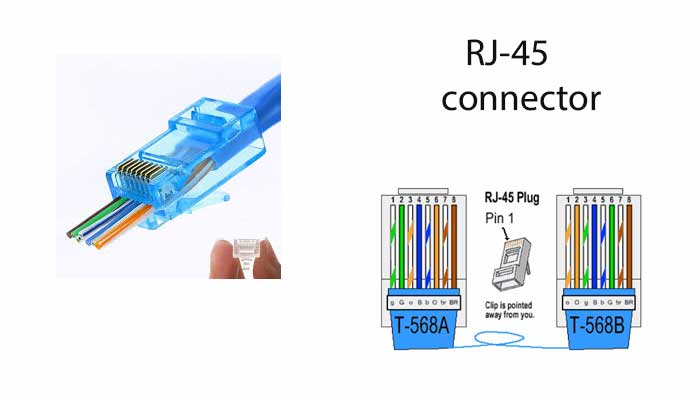 The CAT 5 has the RJ45 cable connection is connected at both ends of the LAN Cable. The RJ45 has eight terminals at each side of the ends. The RH45 has two standards to connect the terminals in the Order color.

The 568 B has a different color sequence than 568 A.Striped orange, solid orange, striped green, solid blue, and striped brown and solid brown.

The connection of both ends is not a mandatory thing of the CAT 5 cable.

CAT 6 is one of the standardized twisted pair. The CAT 6 has the property of interoperability for the old systems and has the property of CAT 3 standards. The Cat 6 has a high performance of the 500 MHz than the CAT 5 and CAT 5e with the 55-meter length, the bandwidth rates the range of frequencies in a cable for reliable performance, and high speed.

The CAT 6 uses the cross-talk with the tighter wire pairs and to make use of all the internal wires.

The CAT 6 performs high effectively than the CAT 5 and CAT 5e twisted cables. The CAT 6 has the four pair cable Twisted pairs.

Difference Between CAT 5 and CAT 6 cable

Types of the Ethernet cable

There are different types of ethernet cables we have discussed earlier. Let us talk briefly about each type of the Ethernet cables.

In Ethernet wired communication, we use different types of cables in it. Recently, Twisted pairs are using for communication purposes.

In shielded Twisted pairs, it prevents the data from the electromagnetic energy and interference with the other data transfer cables. All the cables are twisted and wrapped to protect from the interference of the data. 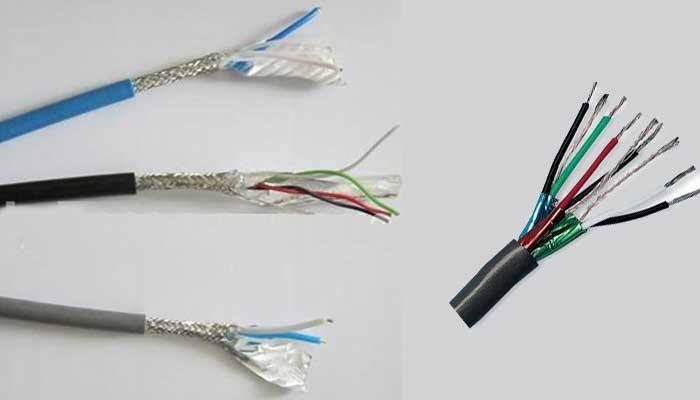 If the cables are wrapped as straight, it may impact the data transfer of other bits.

Normally, we can connect the cables to the router, modem in order to provide internet access between the two devices. It is similar to the Unsheileding Twisted pairs. These shielded twisted pairs are mostly used for industrial purposes. If we want to maintain our own network layer a bulk of twisted pairs are to be used as wired them correctly and the RJ45 connects are connected in the end-to-end connections.

The Wires in the cable are arranged differently based on the purpose of the cable. Straight and cross over cables are used in these two twisted cables. The Orderings of 568 A and 568 B are arranged based on the colors of the Twisted pairs. as we discussed earlier in the first paragraph.

The 568 A and 568 B are mostly similar to each other with a slight difference in the color order. If both sides of the cable connectors used the same standard then it is called the Straight patch cable. These straight cables can pass the signals from one end to the other end. Many of the hubs, switches, routers are connected to the straight path cable.

There is another cable called the crossover Cable. Local area networks are the applications of the cross over cable. The cross cables are used to connect the two ends without any router or hub connected in between. 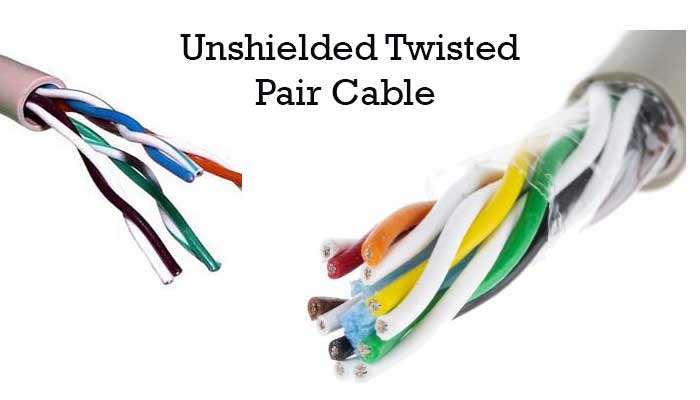 Let us discuss the categories in the CAT Cable :

Summary of CAT 5 and CAT 6 cable

Cat5 and Cat6 are the different versions of ethernet cables that are used for a variety of purposes,  these are the most commonly used as a network cable. They are used to connect different devices like computers, printer, switch router, and the servers. The purposes of cat5 and cat6 are almost the same but there are some differences in their characteristics. To know the difference between Cat5 and Cat6 cable read the article till the ends.

Electronic equipment including cat cables emits electromagnetic signals. When more than one cables are near to one another, these cables can interfere with one another.

This interference is called the “Crosstalk”. Crosstalk increases numbers of lost packets and errors.

The newer version of cat cables like cat6 and cat6A cables reduces the impact of crosstalk through various methods, like improved shielding and twisted cable design. 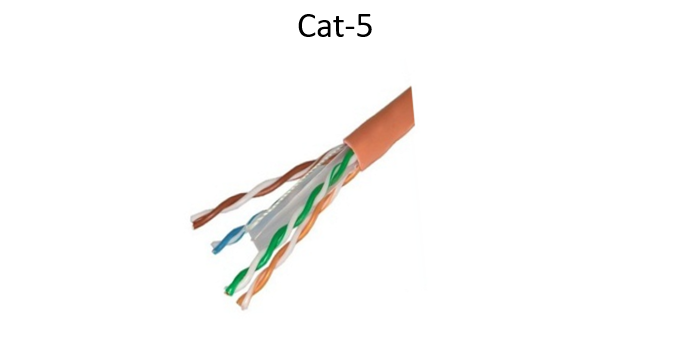 Cat5 is the short form of Category 5 cable, It is a twisted pair cable that is used in networking for connecting the different devices in the network. Cat5 cables are using very from the last some years due to its limitation as compared to Cat6 and Cat6A. However, the cat5 cable can handle up to 10/100 MHz bandwidth, the newer version of Cat cables are significantly faster.

Cat5E which is short for the “Category 5 Enhanced” became the standard cable ab0ut 15 years ago and offers significantly improved performance over the old Cat5 cable, It is 10 times faster speed and it has a greater ability to traverse distance without being impacted by crosstalk.

Similarities Between Cat5 vs Cat6 Cable

It’s worth nothing that both cable Cat5 vs Cat6 Cables use the same thing, i.e. they’“plug in” to the same ports. The variations between every one of those cables are in their capabilities, furthermore because of the ways and materials want to produce them. The “end” that each one the cables have in common is understood as RJ-45, and it’s capable of plugging into any LAN jack on a pc, router, or another similar device. no one within the industry expects this to vary anytime shortly.

Cat6 cables are around a number of years less than Cat5E cables. However, they need primarily been used because of the backbone to networks, rather than being run to workstations themselves. the reason for this (beyond cost) is that the indisputable fact that, whereas Cat6 cables will handle up to ten Gigabits of data, that bandwidth is limited to 164 feet — something on the far side that may rapidly decay to only one Gigabit (the same as Cat5E).

Cat6A is that the newest iteration utilizes an exceptionally thick plastic casing that helps in reduces the back disturbance (crosstalk). The biggest difference between Cat6 and Cat6A cables is that Cat6A will maintain gigabit speeds for the total 328 feet of Ethernet cable.
Ultimately, those that wish to own the foremost “future-proofed” cable can wish to travel with Cat6A. However, for many resident and commercial purposes, Cat5E and Cat6 cables ought to be more than sufficient.

So What Do I really want Cat5E or Cat6 Cables?

But all of this ultimately demands the foremost important question of all –which one of these two cables do you actually need, and why? the solution to it could be an easy one, however not essentially within the method you think that. whereas Cat6 cables area unit clearly the “better” alternative if you’re only looking at technical specifications,

So what are you making an attempt to accomplish, anyway? If you’re a residential user, Cat5E goes to be quite capable of meeting as regards to a need that you just would have. In fact, the speeds supported by this kind of cable area unit possible quicker than what your residential net association will give anyway – a minimum of for succeeding few years. once the time will come back to upgrade it won’t essentially be tough or maybe big-ticket to try to this, which suggests that for the Cat5E goes to be simply fine.

If you’re a commercial user that encompasses a high demand for not simply quick net speeds however quick internal speeds, on the opposite hand, you’re talking a few totally different stories altogether.

If you are doing heaps of video and audio-written material or process on networked machines, as an example, or if you rely heavily on your ability to quickly transfer files from one pc to a different (as you’d with applications like AutoCAD), as an example, Cat half-dozen cables with high Gigabit networking area unit fully the thanks to going. Not solely can they assist higher service your wants as they exist these days, however, you’ll primarily be taking the step to future proof yourself against the ways in which during which your wants an amendment over succeeding few years, too

Download difference between Cat5 and Cat6 cable in pdf