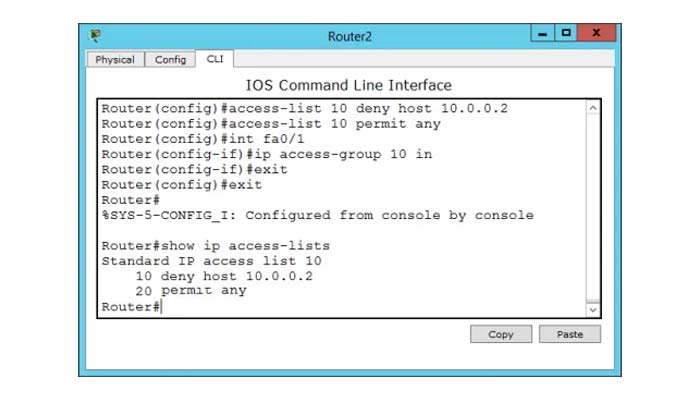 The figure shown above is an example of the Standard Access Control List lab work. The figure consists of six workstations, three servers, three routers, and three switches. In the figure, it is clearly mentioned the hostname, IP address and the interfaces of routers. And at the bottom part mentions the IP address of workstations and servers respectively.

The main point to notice is that at the end of the statement there will be a deny statement. If at the end if there is no “access-list 5 permit any” statement then the standard access control statements above can filter all traffic to destination networks. To delete the standard ACL use the command called ‘no’. We cannot remove a specified statement instead we can delete or remove the entire statement. The statement can be written as:

We use an IOS command named “access-group” for the configuration of the standard access control list. The access list can be used with the interface by using this command. The basic format used is given below:

To specify the direction of filtration the in/out keyword is used.

When the traffic arrives at the interface or the router filtrations need to take place which are specified in the keyword.

When the traffic leaves from the router or the interface filtration occur and these are specified in the out keyword.

To remove or delete the standard access control lists from the interface the command used is “no”. The statement can be written as: