You must be thinking what is spanning tree protocol and why we need it? The Spanning tree protocol is a layer 2 protocol i.e. data link layer of the OSI model. This protocol helps to avoid switching loops in the network that may lead to more bandwidth utilization, mac database instability, and broadcast storms.

Whenever there are two or more than two links between the switches for the redundancy purpose then STP comes into the picture.

It uses a spanning tree algorithm and by using it blocks the redundant links and according to the STP election process, some ports will remain active. The STP is enabled by default on all the cisco switches. There are different types of STP available:

1D: This is known as the common spanning tree protocol and it is enabled by default in all the switches. It is a standard developed by IEEE wherein the single root bridge is elected for the whole topology and other switches become a non-root bridge. It takes 30 seconds to complete the whole process of the STP election.

PVST+: This is the Per Vlan Spanning tree+ and it is cisco proprietary and by default enabled for the Cisco switches. It helps to elect the root bridge per VLAN basis. It is helpful in load balancing as we have separate root bridge for each VLAN.

1w: This is the rapid spanning tree protocol and it is an IEEE standard that works faster than a common spanning tree and comes with the less STP port states. The election process is the same here also that is one root bridge for the whole topology.

Rapid Per VLAN spanning tree+: This is the Cisco proprietary protocol and works faster than PVST and the process is the same as PVST that is the root bridge for each VLAN. It requires more CPU resources than normal STP.

1s: This is the multiple spanning tree protocols and it helps to choose the single root bridge for the group of VLANs. Hence, it provides more load balancing and faster than other versions of STPs.

Let’s understand this by using the following diagram: 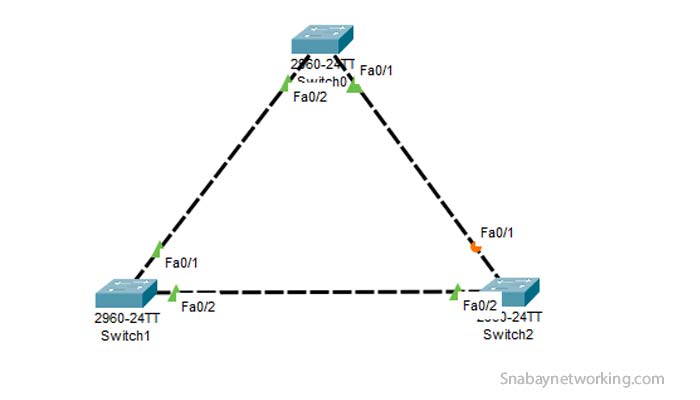 In the diagram we have three switches 0,1,2 and you can see the port Fa0/1 of switch2 is in blocking state. After the STP election process, that port moved into the blocking state, and if the link between switch 0 and 1 or switch 0 and 2 goes down then the port f0/2 will go into the forwarding state.

Want to know which switch becomes the root bridge? 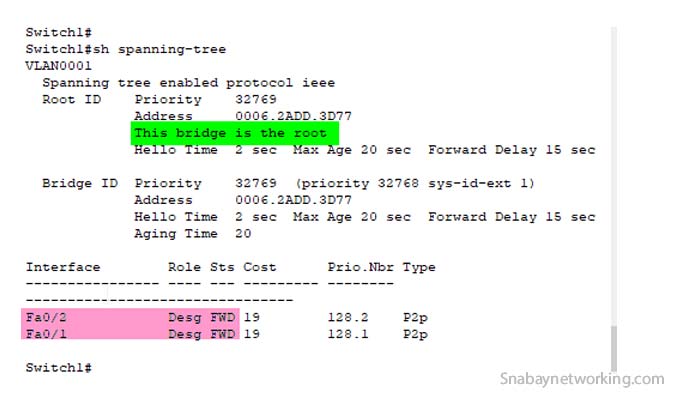 As you can see Switch1 becomes the root bridge and all the ports of the root bridge always remain in the Designated role and state be forwarding. There are several factors through which STP chooses Switch1 as a root bridge. Following are the factors when it comes to choosing the root bridge:

Note: Root ID is the Root Bridge information and Bridge Id is the Information of local switch(Non-root Bridge) 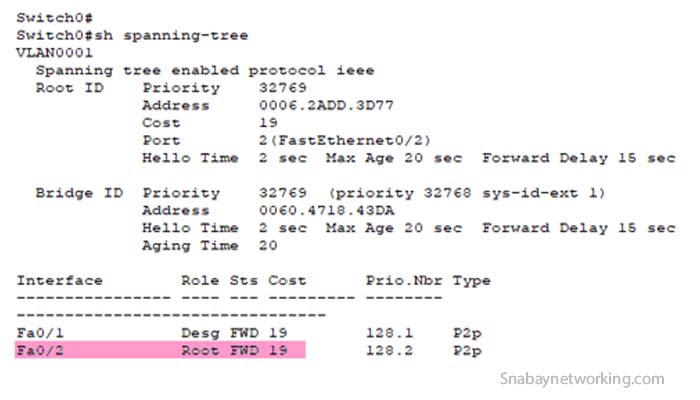 The Switch0 is the non-root bridge and one port of every non-root bridge must be Root port and always in forwarding state.  Now, you must be thinking about how switch0 elects the Fa0/2 as a Root port.  To select the Root port see the following points: 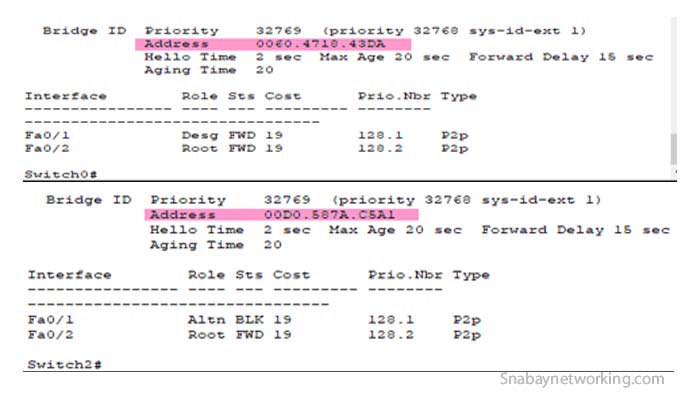 There are five STP port states:

A disabled port is a shutdown port that means it is administratively down. In this state, the port is not allowed to do anything and we can say, STP does not run in this state.

Once that port is administratively enabled, the port will be moved to the blocking state(BLK). The port still cannot do much, no frame forwarding, no frame receiving, and therefore no dynamic learning of MAC address. In this state a port is allowed to accept BPDUs from the neighboring switches.

Listening is the next state. In this state the port is listening for BPDUs and a port is allowed to send BPDUs and can accept BPDUs, permits port to take part in the root bridge election. A port in listening mode cannot forward or receive frames and thus the port cannot learn the mac address.

Learning is the next state. A learning port is not forwarding frames but it is learning mac addresses and adding them to the switch mac address table. A port in the learning state continues to do the process of sending and receiving BPDUs.

Forwarding is the next state. A forwarding state allows a port to forward and receive frames, send and receive BPDUs and continue to learn mac address. This is the only state where the port is forwarding frames.

How BPDU generated and How BPDU works

The Root bridge election process never ends if the new switch comes with the lowest Bridge Id then it would become the Root Bridge. Every switch in the topology sends out BPDU messages after every 2 seconds which includes the bridge id, port cost, root path cost, and many others. The non-root bridge switches in the toplogy may generate only TCN BPDUs( Topology change notification). Whenever there is a change in the topology then non-root bridges may start to generate the TCN BPDUs to inform the root bridge that is something added or removed from the topology.

The Hello timer is by default 2 seconds. Every switch sends out BPDU messages after every 2 seconds with the values like root cost, path cost, bridge id. We may change the default hello timer and set it accordingly and to deploy the Stp timer deployment in the whole topology, you need to change it in the root bridge.

In the above command, we change the hello timer to 6 seconds.

The Max-Age time timer is by default 20 seconds and it indicated for how long a switch will keep the BPDU message before discarding it.

In the above command, we change the forward-timer to 18 seconds. 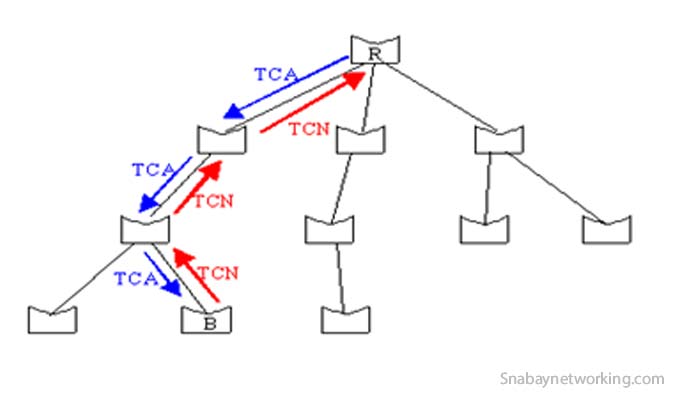 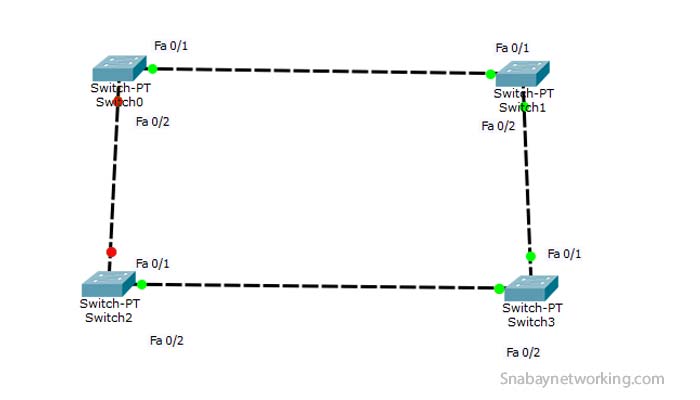 If the port between switch0 and switch1 goes down then it will take a total 50 seconds for the port fa0/2 to come up. This is because the link between switch0 and switch1 is not directly connected to the fa0/2 port of switch3. When the port goes down then the max-age timer starts and it will wait for 20 seconds to receive BPDUs and when BPDUs are not received then port fa0/2 goes into listening and learning state which takes 30 seconds and the total is 50 seconds.

Where to place the Spanning Tree Protocol Root Switch(Root Bridge)

Here, priority is 32769 because the switch comes under vlan 1 so plus 1 is added for the VLAN.

As we know old switches have less CPU and hardware resources so they would not be able to handle the large network traffics and thus it may lead to packet loss, slow speed, and many more. 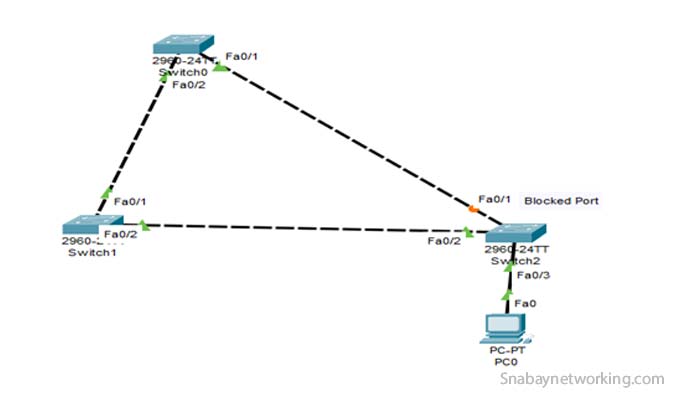 As we can see in the above screenshot, port fa0/1 of switch2 is blocked and if you go with normal STP and thus if the link fails between switch1 and switch2 then it will be approximately 50 minutes before the blocked port may come up and that is bad for the network topology.

With the help of Uplink fast feature, the port fa0/1 can be used to forward the frames without any delay i.e. immediately. The concept of the uplink group is used which includes the root port and the other blocked port like in the case of switch2.

When we apply the uplink feature on the switch, it does perform two immediate actions. First is, it increases the priority of switch to 49152, and second is, it increases the port cost by 3000.  When the link between switch1 and switch2 goes down and thus there will be invalid entries available to send frames to PC0 and in that case, switch2 sends and floods dummy frames to switch0 and those dummy frames include every single mac address entry in switch2.

The flooding updates the mac address of switch0 and then frames are forwarded correctly. 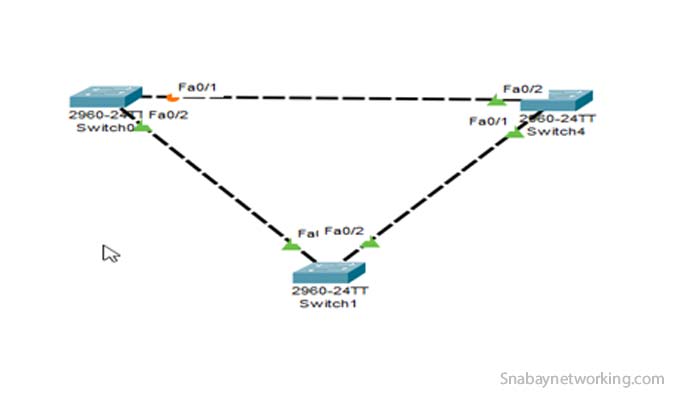 The Backbone feature is a cisco proprietary and it helps the network to recover from the indirect link failures as soon as possible and the specific word here is Indirect. In the above screenshot, if the link between switch1 and switch4 goes down then it would take up to 50 seconds to come to forwarding state for fa0/1 port in switch0. In our case, switch1 is the root bridge, when the link goes down then switch4 assumes itself as the root bridge and thus switch0 receives BPDUs

Backbone does not help to move the port immediately to forwarding but it does reduce the convergence time from 50 seconds to 30 seconds by eliminating the Max-Age timer.

What is Spanning Tree Protocol Portfast

We may enable it per-port basis also.

How to configure and verify Spanning Tree Protocol Portfast 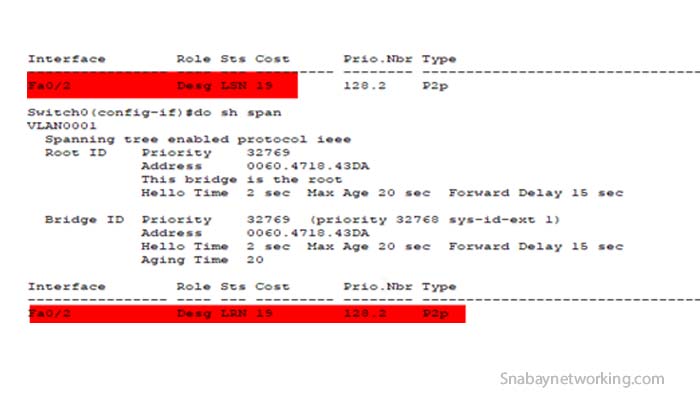 If we enable the Portfast feature then the port fa0/2 will be moved into the forwarding state without any delay. 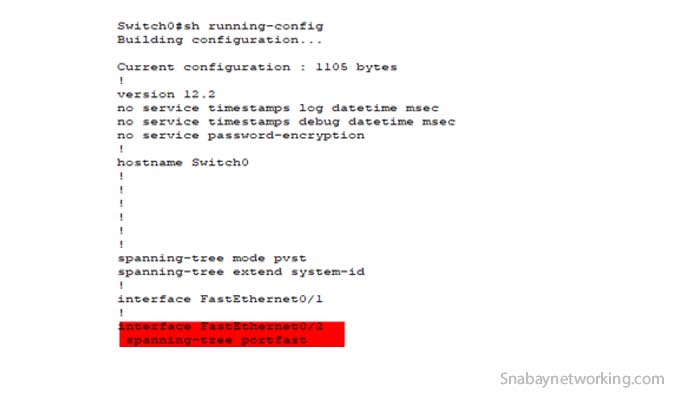 To verify you may use show running-config command. In the above screenshot, you can see int fa0/2 is configured with the Portfast feature.

How to enable and disable spanning tree protocol

Following are the commands to enable and disable the spanning tree protocol :

Enter configuration commands, one per line. End with CNTL/Z.

Enter configuration commands, one per line. End with CNTL/Z.

After disabling you may verify it by using the command Show spanning-tree.