A Network Switch is a networking device helpful to connect multiple devices. Like if we have 10 computers then we can connect computers to the ports of the Network switch for the local communication and it works on the second last layer of the OSI model i.e. Data link layer. It uses mac addresses to make decisions. It has per port collision domain and single broadcast domain like if we have 48 ports switch then there are 48 collision domains and 1 broadcast domain.

A collision domain is a part of the network wherein packets may collide. When one or more devices send packets across the shared channel at once then it may lead to a collision and thus reduces the efficiency of the network. After the collision, packets need to be sent again by the device but a single device at a time to complete the transmission of the packets. 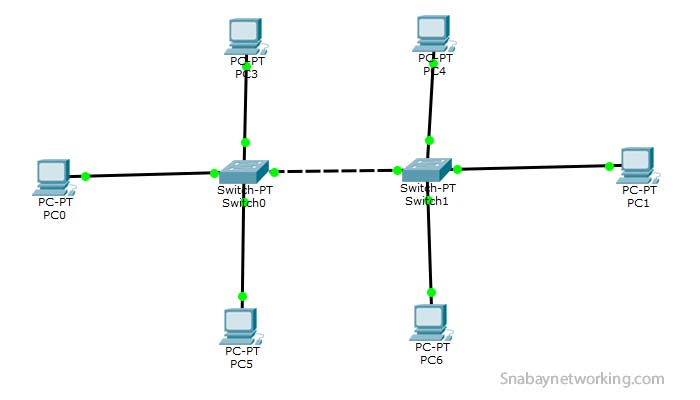 A domain broadcast is the boundary of the network up to which your packets may travel. All the ports of the Network switch come under a single domain of broadcast i.e. if you send packets the first time then the packets will be broadcasted to every machine connected to the switch.

In the above picture we have 7 collision domains and 1 broadcast domain.

Moreover, switch works on the network Star topology wherein each node or device is connected to the centralized device i.e. a Switch.

How a Network Switch Works

In every network card, there is mac address burned out and it is of 48 bits or 6 bytes. This mac address is used among the devices for communication. If two machines want to communicate then both the machines should know the 6-byte mac address of each other before sending out the packets.

As we know switch decides what needs to be done after seeing the mac table or CAM table which is nothing but the entries of mac address received on the switch ports. This mac address table is saved in the ram of a switch, once the switch is restarted and there is power failure then all the mac entries are gone. Following are the processes performed by the switch: 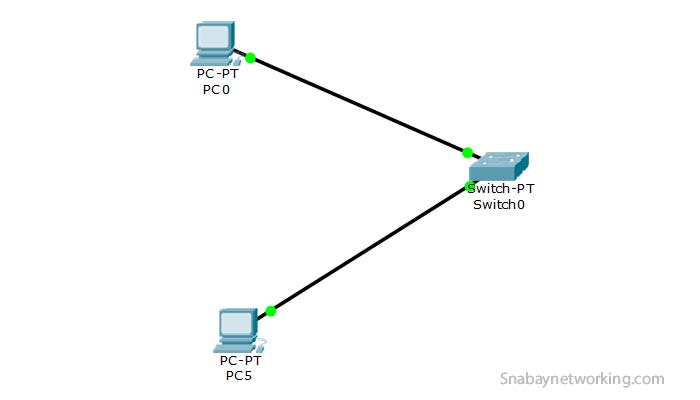 Moreover, the Maximum-Aging timer for the host entries in the mac-address-table or CAM table is 5 minutes or 300 seconds. However, we may change this max-age timer by using the commands.

You may see the CAM table by using the command show mac-address-table. 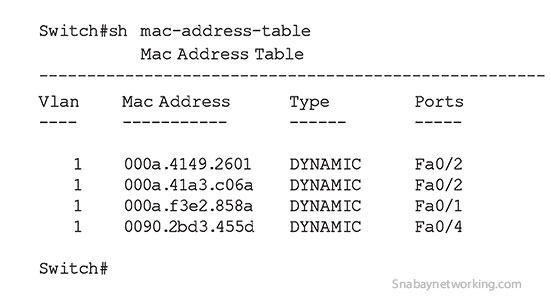 As you can see in the above picture mac address or CAM table has four entries:

Let’s understand how a switch works:

Let’s say I want to ping PC5 from PC1, as we can see there is no entry available in the mac address or CAM table of the switch. 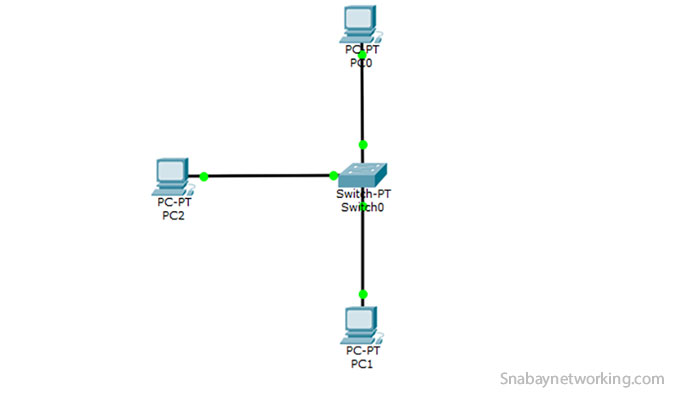 When I ping PC5 from PC1 then first it generates the ARP request to know about the mac address by using the Ip address of PC5 and this arp request will be forwarded to all the ports of the switch except the port from which it is originated then in return, the only  PC5 gives the ARP response to PC1 and afterward, ICMP packet will be forwarded. As we can see in the picture firstly PC1 generates ARP request and after knowing the mac address of each other, the actual ICMP packets transmission started.

After the whole process, 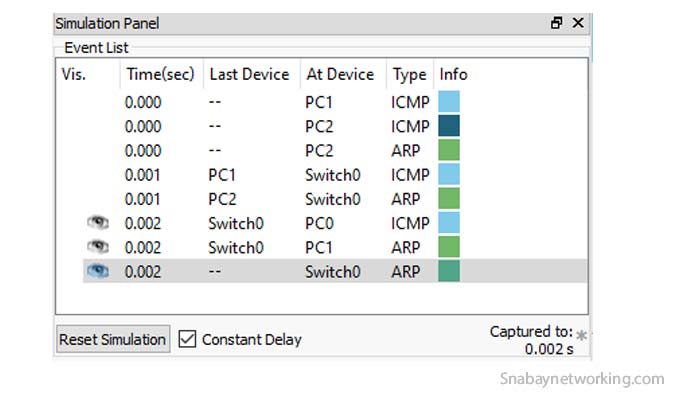 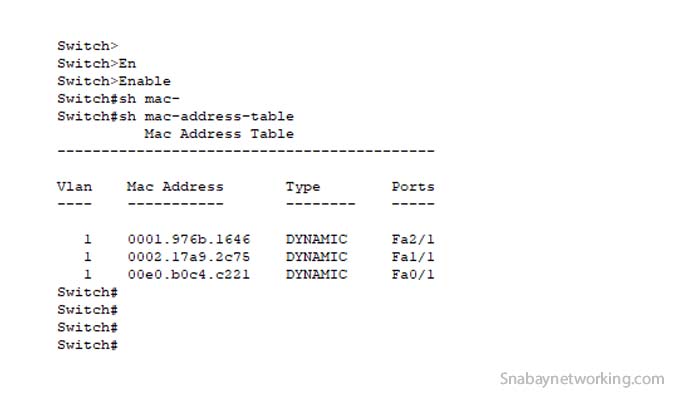 Moreover, these entries will remain in the mac address or CAM table for the 5 minutes. After 5 minutes all the mac entries will be gone and then again the arp request needs to be generated to find the destination address.

Difference Between Hub and Switch

A Hub is also a network device that is not used in today’s world. It works on the physical layer of the OSI model and similar to switch that is you may connect several machines to a particular LAN Network but the working of the hub is different from switches. It has one collision domain and a single broadcast domain that means only one device may forward packets at a time over the shared network medium. 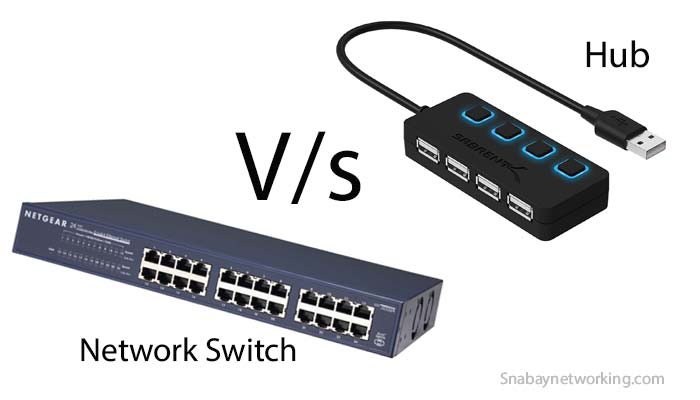 A Hub runs on Half-duplex and thus uses CSMA/CD( Carrier Sense Multiple Access with Collision Detection) to avoid collisions on the shared network segment. This CSMA/CD mechanism helps devices to know when is the right time to send packets and if a collision occurs on the way then what to do further.

Hubs do not support the concept of VLAN and STP. Following  are the two types of Huba available:

The switch is a data link layer device and it runs on the full-duplex mode that means we may send and receive packets at the same time. It is known as the Intelligent device. It does understand mac address and seeing mac address makes the further decision. It has more ports than the hub. Mostly comes with 24 or 48 ports. You may have the option to change the mode to half-duplex in the switch.

The switch supports the concept of VLAN to segregate the broadcast domain and helpful in network security and the STP(Spanning tree protocol) is used on the switches to avoid layer 2 switching loops.

Difference Between Router and Switch

We may also perform routing on switched but for that, we need to use Layer 3 switch

A  layer 3 switch works on the third layer of the OSI model.  The multiplayer switches can do switching as well as routing also.  It is widely used for inter-VLAN routing as we can communicate with different VLANs. We can also use these switches for the routing purpose by using the IP routing command. By default, we cannot give IP to the port of the multilayer switch. For that, we need to type the command ‘no switch port’ inside the particular interface, and afterward, we may set the IP address to the interface.

Different Types of Switch In Networking with their capabilities

There are different types of switches available in the market that you can use according to the requirements:

Modular switches are also used in the network and provide us the capability to change the parts of these switches. These switches can be modified according to the increasing needs of the business and users. The components which are usually changes or replace:

Non-modular switches are also used in the network but with the fixed configuration i.e. with the limited number of ports and they are not expandable and thus cost of these switches is also low. These include unmanaged and smart switches

Stackable switches are network switches that can operate standalone and with a group of switches as well. Generally, in the production environment, we use stacking technology to do the stacking of multiple switches.  In the stacking process, the group of switches is stacked together like we have made a group of 16 switches and a single switch master needs to be created and then by using the master switch, we may manage the other switches also. Now, all the switches behave like only one switch. We don’t need to configure every switch separately.

Non-stackable switches are the standalone switches and they don’t have stacking port in the back for the configuration of stacking technology that means these switches cannot be combined to form a single virtual switch and thus we need to configure every switch manually.

Difference between Managed and Unmanaged Switches

Managed Switches give functionality to network admins to manage and have control over the LAN traffic and it provides security by using SNMP, Access-lists, NAT. By using these switches Quality of Service can be achieved.

Unmanaged Switches are widely used in the home and small business environments as there is no need for any configuration. You just need to plug and play the devices. It is used to connect computer to computer, computer to a printer. These switches can be set up very easily without wasting any time and they are economical also available at low prices than the managed switches.

How to Configure Network Switch Step by Step 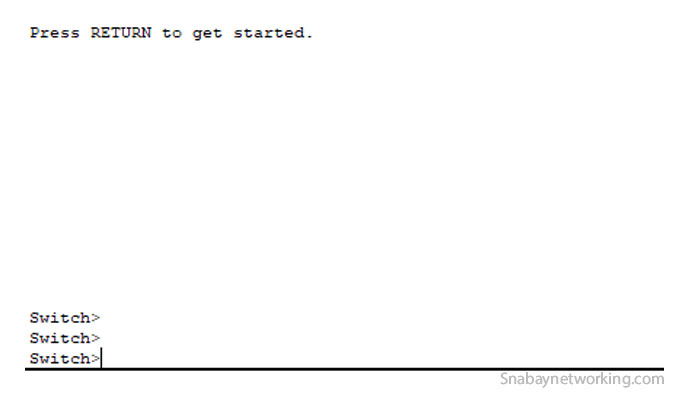 The above screenshot is the user exec mode. 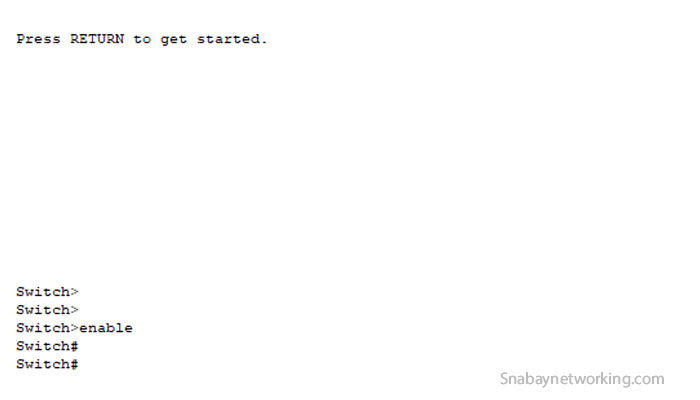 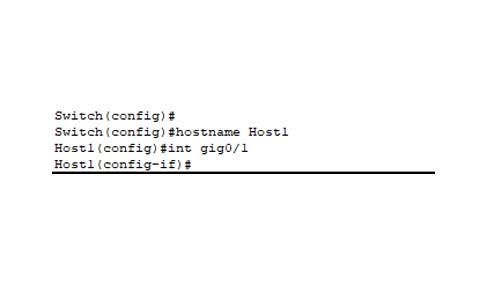 To check the configuration of the switch we use show running-config command and this is the running configuration that is available on the RAM of a switch. 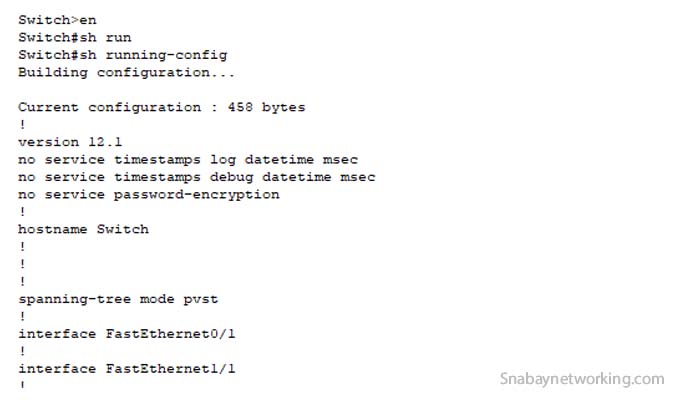 If you want to configure the console port then use the above-mentioned commands in the screenshot. Here, we are entering the console by using line con 0, and then we set a password as Cisco123 and we enter the login command to enable password checking and now whenever you try to enter to switch, you will be asked to enter console password.

To configure telnet, see the above-mentioned commands in the screenshot. By using command line vty 0 4, we are configuring telnet for 5 users i.e. five users may access this switch at once then we set a password as cisco and enter login. We need to enter enable password ccnp123 command also, here ccnp123 is the password. While accessing the switch, we need to enter the password as ccnp123 to move to privilege mode from user exec mode.

Advantages and Disadvantages of a Network switch