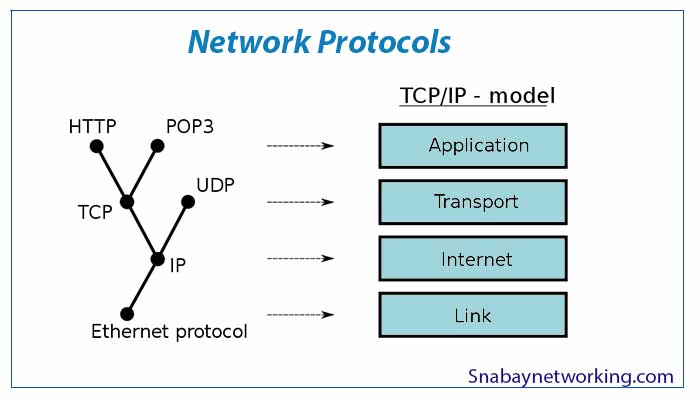 Network Protocols are collections of formed rules that dominate how to transmit, format and share data by which computer networks can communicate anyway to the differences in their different infrastructures, processors or standards. Both the side computers must follow protocols to share files or data easily without any friction. There are both software and hardware support to the network protocols.

The most famous model used for communicating two systems on the Open System Interface (OSI) model proposed by ISO. This model is not a network architecture because there is no specific layer or protocols for computers in this model.

Now we can discuss different types of protocols. There are several protocols.

This protocol is mostly used for the purpose of sharing or transferring files or data for one to another. The way of transferring files from a server to a client computer. FTP users may verify themselves normally by a username and a password. It is secured with SSL/TLS (FTPS).

The first FTP client apps were command-line programs that have Graphical User Interface (GUI) and shipped with basic windows, Linux and Unix OS. This is included incapable applications like HTML editor.

The term address resolution defines the process of finding a computer’s address on a network. This is used by IP (Internet Protocol). It is operated below the layer of a network like an interface between OSI link layer and the OSI network.

An Ethernet network required two addresses of hardware which recognized the source and address of each frame sent by ethernet. The hardware address is also known as the Medium Access Control (MAC) address.

DNS is a protocol network like database naming which locate and support the Internet Protocol (IP) network. It is basically used to name a web address by which a computer easily reach the website or help the people to easily remember the name of that website. Let us take an example, if a person types abc.com into web browser then DNS send it to the network protocol in different language or sign.

A domain name is normally made of different labels (made into multiple parts). Top-level domains are like .com, .org, .in etc.

Basically TCP/IP is a set of rules following by the computer networks on the internet. Most appropriately, TCP/IP allow computer how to get, receive or find its destination on the network system. It was developed by Bob Fahn and Vint Cerf in 1978.TCP and IP are two different protocols. Actually, TCP is accountable for the transmission of data on internet protocols. IP dictates all the packets sent over the networks.

DHCP basically assigns all the IP addresses so that every computer communicates with any other IP network. It can be executed on networks ranging size from Home networks to all the Campus networks. A router is made to work on this protocol. The router is basically said to be broadband. Most dormitory network routers allow a global IP address with the ISP network. DHCP assigns a local IP address to the local computer networks within a locality.