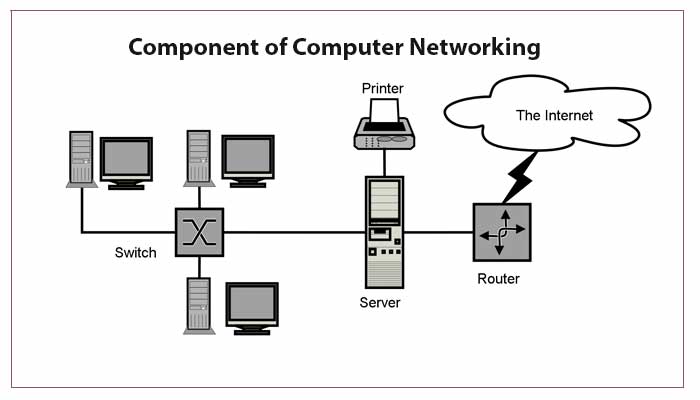 There are some hardware components of networking that helps in building a network to make communication possible. Some of these are as follows:

Client: a client is a computer that uses and accesses the network and shared resources. Basically, the client sends the request to the server and the server performs according to the user request.

NIC: It stands for Network Interface Card (NIC) that holds the physical address of the computer. It also prepares and sends, receives and controls the data in the network. It passes and receives the data through the physical layer.

NOS: The NOS stands for Network Operating System is a program that runs on computers and servers and allows the computers to communicate with each other over the network.

Switch:  Switch is a networking device that performs the task like data flow and control and error detection. It is an advanced version of Hub and it is a layer two device that operates at the Data link layer of the OSI model. It’s every port carry a separate collision domain.

Hub:  It is a networking device that operates at the physical layer of the OSI model and its every port carries multiple collision domains. It covers the frame in bit/ byte or in the electrical signal.

Router: Router is a device that allows connecting multiple computers of the different networks simultaneously and they able to share the data, information, and resources to each other.

Gateway:  It allows us to connect two different networks.

What are the Components of Computer Network