Close
Ask a Question
Home/ CCNA Security/What is Hacking, Types of Hackers and How Hackers are Classified

Hacking refers to the act of compromising the Security of Target System and gaining unauthorized access to it. It targets Confidentiality, Integrity, and Availability of the System. Various tools and techniques such as Malware, Worm, Trojan, backdoors, DoS Attacks, phishing, Scripting, Shellcodes, password cracking, wifi cracking, are used in Hacking Activity. The objective of performing such activities could be either curiosity, thrill, power, revenge, financial gain, etc.

Hackers are not the bad guys always. Some Hackers work to strengthen the target System whereas some to collapse it. In this article, we would be discussing various types of hackers and the way they are categorized. In most basic form, Hackers are the individuals having the ability to exploit the vulnerabilities in the target system.

Depending on the intention, nature, and capabilities of Hackers, they are classified in the below Categories. 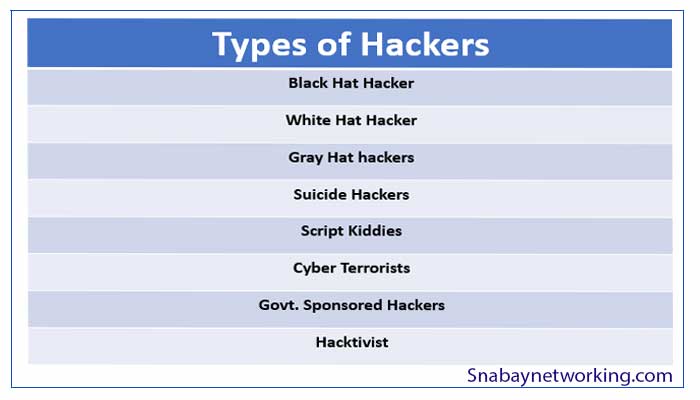 Black Hat Hackers are individuals who penetrate the system without authorization from the owner. They do not leave traces of the attacks. Black Hat Hackers use their hacking skills for malicious activities. They possess extraordinary skills in the Computer hardware and software domain.

Suicide Hackers aim at collapsing the critical target System or Infrastructure for some reason and do not worry about any kind of punishment. They perform hacking activities without caring about their act getting identified. They are ready to sacrifice their life just like suicide bombers.

Script kiddies are individuals who do not possess proper hacking skills. They usually try to attack and compromise systems using some readymade tools, scripts, and techniques to accomplish their tasks.

The Objective of Cyber Terrorists is to create environment fear and grief by performing large-scale attacks. They are usually directly linked with real Terrorists/ Criminals.

These types of hackers are employed by some government departments to perform attacks against their target Infrastructure.

The individuals promoting their social or political motives by utilizing hacking skills are termed as Hacktivists. They usually compromise the Government or other related agencies as an act of their protest.