A discussion about the Types of cables Used in Networking is an important one, especially if you are planning to take the Cisco exams. You need to really understand the following three types of cables:

The cat5E which is short for Category 5 Enhanced unshielded twisted pair (UTP) cable can handle speed up to a gigabit with the distance of up to 100 meters. (Types of cables Used in Networking)

Straight-through cable is a Types of cables for Networking

Straight-through cable and crossover cable designs use many of the same standards and conventions. For example, a cat5e or Category 5e cable structure can be used for both. These cables are also subject to various other technical standards that provide consistency for these kinds of hardware connectors. Typically, a straight-through cable will terminate in a registered jack connector that looks somewhat like the common jacks on traditional telephone cables. Specific models of RJ connectors are used for these cable designs.

The straight through cable is used to connect the following devices. These are:

In the straight-through cable 4 wires are used to connect Ethernet devices. It is relatively simple to create this type.

A crossover cable is a type of cable installation that is used for the interconnection of two similar devices. It is enabled by reversing the transmission and receiving pins at both ends so that output from one computer becomes the input to the other, and vice versa.

A crossover cable is generally implemented on a twisted pair cable that consists of four pairs of cables. For crossover cable to work, both ends should follow the same wiring format.

The reversing or swapping of cables varies, depending on the different network environments and devices in use. For example, in a 100BaseTX network, the second and third pair must be swapped at each end to create a crossover cable. A crossover cable is also used to create mesh networks that work without an intermediate network device, such as a hub or switch. 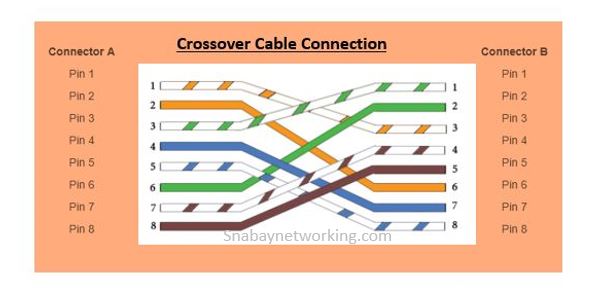 The crossover cable can be used to connect the following devices:

Note: While in the past when connecting two host devices directly a crossover cable was required. Nowadays most devices have auto-sensing technology that detects the cable and device and crosses pairs when needed.

Rollover cable (also known as a Yost cable or a Console cable) is a type of null-modem cable that is often used to connect a computer terminal to a router’s console port. This cable is typically flat (and has a light blue color) to help distinguish it from other types of network cabling. It gets the name rollover because the pinouts on one end are reversed from the other as if the wire had been rolled over and you were viewing it from the other side.